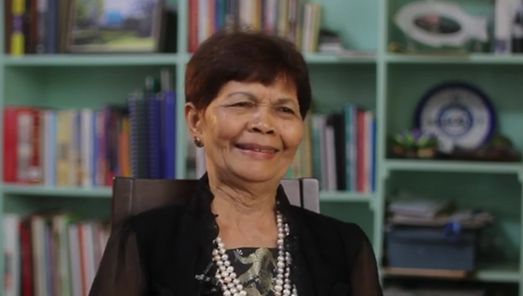 A hero is an epitome of hope, strength, selflessness, confidence and success. He is someone who pursues justice just like what we usually see in movies. Thus, he is always the one who saves the day. In our everyday lives we might not know it but we may be interacting with heroes. But of course, they are not the typical superheroes that we imagine growing up – a hero who is wearing a cape and a shining-textiled costume, holding a weapon, possessing a power to control time or even has the ability to fly in space. The heroes of reality look, act, talk and live like everybody else in this world. They also have their own imperfections and falls down when life hits them hard.

The next words might sound a little comical but if the Avengers have Iron man who ended the battle against Thanos, Dansalan College has its one and only Iron Lady, the President herself, Dr. Fedelinda B. Tawagon, who possesses a power that can always put up a good foundation out of her sincere dedication and service towards the institution.

Madame Tawagon has been the President of Dansalan College for many years and for all those amazing years of serving an institution where most workers are Christians and the majority of the students’ population are Muslims, the school never fails to produce students who are better behaved and graduates who are performing excellently in private and government offices. This ironic setting result to her always receiving the same query from people, “How do you manage?” With this simple question come her strong words, “I do not see any difference in dealing with young people- learners.”

For her, the involvement in ecumenical service means that she does not look up people in the basis of religion, that she accepts anybody regardless of religious affiliation and she does not impose anyone to become a Muslim or a Christian. These things made her a deserving hero for many reasons which is why recently she was one of the successful recipients of the Unsung Heroes Award given by the National Office of the United Church of Christ in the Philippines.

She received the Unsung Heroes Award in the United States of America last June 2019. While being there, she shared with the supporters, partners and friends the work she did after the siege because Dansalan College had been in Marawi City for 67 years and it had been doing good in order to make the young people from Marawi become equipped in terms of academic and service.

“In the context of religious affiliation, we are only human beings and our religious affiliation is more of a man-made, being organized by people. On my part, I’ve been in Marawi for 50 years and then, of course, there were some discrimination on the part of the Muslim people and I said, ‘Why would I be discriminated just because I am a Christian?’ So I took up a course in law and I’ve learned in Shari’ah Law that I can live as a Christian and would still be accepted by the Muslim. So if all of us, regardless of our religious affiliation, love God above all love others as ourselves, wala sanang away, no war, no competition. So these are the things that I am sharing with them so we got an affirmation award there of the kind of work we do in Marawi City, that a Christian school is doing well with a non-Christian young people and they are excelling,” she narrated.

When asked about her future plans and visions for Dansalan College, she said, “I’d like Dansalan College to become a children’s university.” Based on her response, she wants DC to become an institution that focuses on the young people especially kids. In her perspective, she sees a children’s university as a place where any young person is exposed to co-curricular activities and different fields of interest like arts, fine arts, skilled arts and many more. “So if you are talking about engineering, they would be exposed not to make them become engineers but more of exposing them to different fields of interests in the academe so that when they graduate Grade 12 from the institution, they would be convinced to take an engineering course or consider taking medicine, law, or others.”

The President also has a vision in developing the students’ well-being through teaching them the value of respecting every living thing’s rights, the value of promoting a healthy lifestyle and the value of creating a healthy environment. “When the children would be here with us, they will also learn the so-called ‘environmental protection’ because we would like to make our campus a sample or a model for an ideal ecosystem. That is why I started promoting the idea of animal rights. Huwag niyong galawin ‘yong mga aso d’yan. Huwag niyo ring galawin ‘yong mga birds. Kasi they also live with us.”

She also emphasized the actions the school has been starting to practice in promoting a healthy lifestyle through providing organic food from plants around the school grounds instead of selling soft drinks and junk foods in the school cafeteria. With regards to her plans about the infrastructural landscape of the school, she said, “We will be having an oval here, a track and field and retreat houses. We will also be having cottages for the retiree workers of Dansalan College so that they will still be encouraged to be the coaches of the children in terms of proper behaviour. And then there will be a ‘walk-way’ or the reflexology path, just like the foot path in the City Hall, where you have to walk on stones so that the students would be walking down from the gate moving around the perimeter of our campus and then they will be living a healthy life. Other than these things, DC will also have an herbal garden, a flower garden, and a vegetable garden.”

To encapsulate Madame Tawagon’s vision for the institution in becoming a children’s university, she conceives Dansalan College as a school teaching the young to become leaders in the future with a better mindset and looking at other people as brothers and sisters rather than an enemy just because of religious diversity.

As for the present learners of Dansalan College, our very own Iron Lady left an inspiring message saying, “ Always be cooperative, support the school, while being here you invite others, and if you want to be future  leaders, make use of our trainings here,  be friendly and always be kind to each other.”

Maya Angelou once said that, “A hero is any person really intent on making this a better place for all people.” Looking at any angle, anyone cannot deny that every word in this quote embodies who Dr. Fedelinda B. Tawagon is. She is the source of strength of Dansalan College and she portrays an inspiring role in the institution, as well as in the whole community, who is more than any achievements she receives. She is the Iron Lady that most of us look up to because she continuously proves that she is not just a woman of words but also a woman of actions.